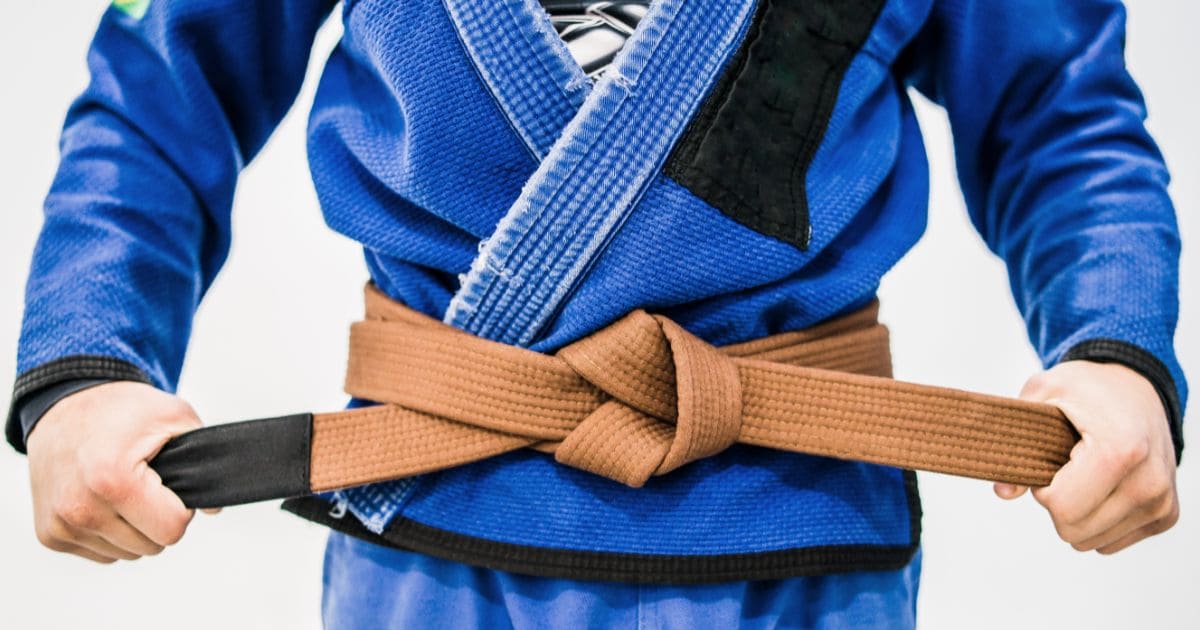 Except for the white, the martial artist must put effort into obtaining every belt. These fighters must put in years of hard work and practice to advance through the ranks and earn their belts.

Brazilian jiu-jitsu is a popular form of martial arts that emphasizes subduing and grappling rather than strikes and kicks. A belt is an important element of the Brazilian jiu-jitsu uniform, let’s take a look at how to tie BJJ belt.

What is a Brazilian Jiu-Jitsu Belt? 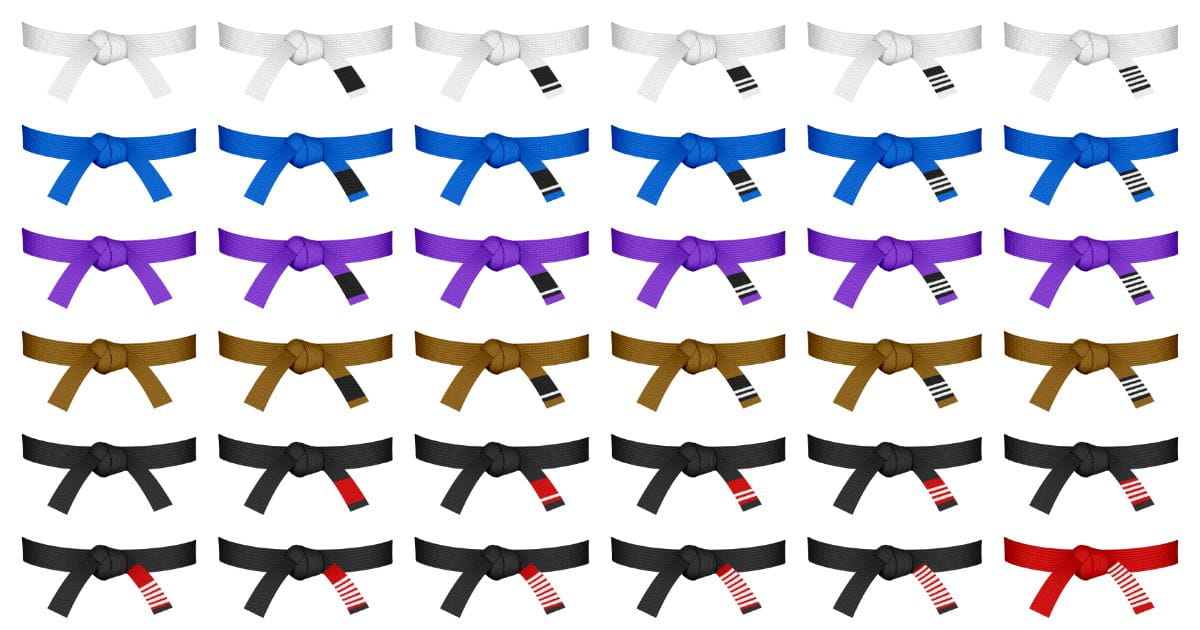 Most martial arts disciplines use a gi as their uniform. The gi is a robe-like shirt made up of a high-grade material which provides durability and discourages holding. Martial artists typically wear a gi to allow optimum performance. It is meant to be fastened by a belt to prevent the uniform from coming off during a match. Apart from holding the uniform together, this belt also portrays an image of a fighter.

Importance of a BJJ Belt

In addition to being a part of the uniform, a BJJ belt holds a special significance in this sport.

You might have heard the common term “black belt“, used to refer to some popular personalities like footballer Zlatan Ibrahimovic or the president of Russia, Vladimir Putin – each have a black belt in different martial art disciplines. The term black belt is used to recognize a person as an incredibly skilled fighter.

Martial arts fighters have to put in a lot of effort to achieve a a black belt – the highest ranking colored belt.

Do You Tie a Different Knot for Each Martial Art Style?

Before we get to tying a BJJ belt, you might be wondering if the knot is the same for all styles of martial arts.

If we consider a judo belt versus a karate belt, the dimensions of the belts used in these two schools are different, so their knots also vary.

If we consider stereotypical fashion styles, the buttons on men’s dress shirts are usually found on the right side, with the buttonholes on the left. For ladies it’s the other way around.

It’s the same rule for martial arts belts, the knot is tied over right for men and over left for women. Lately, the differences in belt tying vary more on the basis of systems or schools rather than the arts.

How to Tie BJJ Belt? 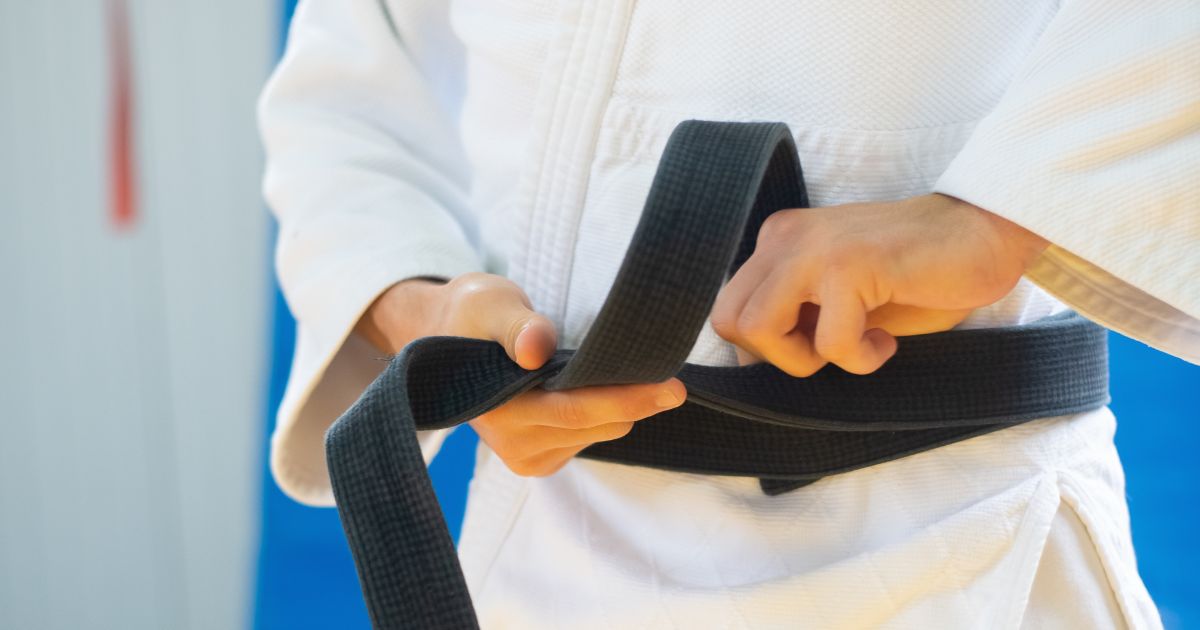 They are plenty of ways to tie a Brazilian jiu-jitsu belt. The knots depend on preference and situations – some practitioners might be okay with a looser knot, while others may prefer a tighter one.

Let us take a look at the different ways to tie a BJJ belt.

It is the most widely used method of knot tying amongst martial arts practitioners. This is a firm knot, however, keep in mind it can accidentally come undone during the game.

After wrapping, cross both ends over each other, meeting again at the front. Make sure that both ends are the same length.

Now cross the right end over the left end and pass it under all layers of the belt from top to bottom. Now fold the bottom strand over the top one and your knot is done!

This knot is mostly used by Brazilian jiu-jitsu competitors because it does a good job of staying in place despite the grappling and holds that take place during a round. According to the BJJ rulebook, if your belt comes undone you are allowed a limited amount of time to tie the knot back again.

Brazilian jiu-jitsu fighters need the tightest knot possible to avoid the hassle of retying a knot during the match.

For this method of knot tying, first locate the midpoint of the belt and wrap the belt front to back just below the navel.

Bring both ends to the front again, cross both strands before passing them under the layers of the belt and back to the top again.

Pass the right strand just through the first layer, not completely, so that it creates a hollow space for the left strand to pass easily underneath the loop.

Pull both strands tightly and there you have it – one strong BJJ knot.

The most straightforward way to tie a knot is also the most insecure knot. Gracie’s knot isn’t very useful so you’ll rarely see it implemented these days.

The method to tie this knot is almost identical to the one for basic knot, the only difference is that once the belt is wrapped around the body, the strands are not looped through the layers of belt. The knot is simply tied at the front.

Jiu-Jitsu requires many types of equipment for the safety and protection of players. Let’s take a look at them below.

Gi is a Japanese term that means ‘uniform for training’. Gis are made of robust materials making them highly durable and resistant. The materials of a gi also make it difficult for the opponent to hold onto the fabric in the middle of a match.

The armor mustn’t fall, thus in order to keep the jacket intact, a belt is used.

The belt also represents a player’s rank and skill level. In ranking order, the levels of belts are:

Grappling shorts are purpose-built shorts for martial arts, designed in such a way that they do not slide off easily, These shorts also allow comfort while grappling during a jiu-jitsu round.

Rash guards are usually made up of spandex and polyester. As the name reflects, it protects the wearer against rashes caused during the fight. It also helps in absorbing the moisture caused by sweating.

A mouth guard is a piece of equipment used for the protection of the mouth during the match. Although jiu-jitsu does not include kicks or blows, precaution is necessary to avoid any kind of mishaps.

The protection of sensitive parts is always necessary, groin protectors come in handy for the protection of the lower abdomen. Also known as Abdo Guards these are designed in a way to absorb high-intensity blows from the opponents.

A piece of equipment that aids in the protection of your head and ears, saving you from a cauliflower ear.

Cauliflower ear can be a menace, it develops clotting due to blood after a strong blow at your ear leading to swelling and deformation of your ear’s shape.

Protective head gear is useful during a competition, which can help guard the face and skull.

During a match, players land or position themselves on their knees often. To protect the joints in these situations, they use knee pads or knee braces. This equipment is specially designed to allow more flexible movement and provide comfort during the fight.

There are gear bags of different sizes and shapes – some are designed to be worn over the shoulder bags while some are in the shape of a bag pack. As for the size, everyone has their own preference depending on how many items they usually take along for a match.

The next time you step on the mat for a Brazilian jiu-jitsu match, you will be well aware of how to tie BJJ belt. Not only this, but you have three different options to suit your needs according to the situation.

To earn the higher ranking belts, you will have to put in the work – the journey is worth it. 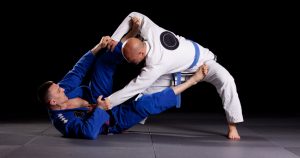 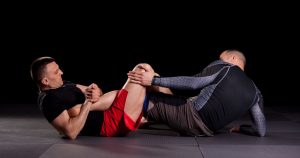 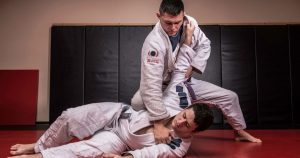 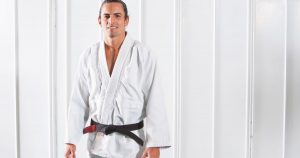 Earning Your Stripes You’ve found a gym, gotten a few lessons in, and you feel ready to roll with the best. Or maybe, you’re thinking